The 30th edition of the International Environmental Film Festival closed in Paris a few weeks ago. The selection of rare, beautiful and eye-opening films was a treat so I wanted to share some of the goodness with you.

Inspired by Adam Leith Gollner’s book of the same name -that also inspired a post in these pages – Canadian director Yung Chang (Up the Yangtze) enters the world of fans of rare varieties of fruits.  As he follows fruit hunters’ travels and meet-ups, he finds the tree of an almost extinct mango, comes across actor Bill Pullman and interviews many of these unsung heroes of biodiversity. The aesthetics of the cinematography makes those fruits and those characters irresistible.

Special prize of the jury: Payback by Jennifer Baichwal 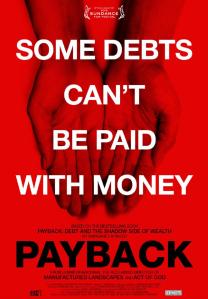 A film with an innovative, mysterious storytelling. Various stories illustrate the different meanings of the word “debt”. A family in the Albanian mountains live with a blood debt, or more exactly they try to live. A prisoner pays his debt to society in a Canadian prison. Farm workers fight for decent working conditions in return for their labor under the harsh Florida sun. The common thread is the voice and mind of the celebrated author Margaret Atwood. The film is based on Atwood’s book  Payback: Debt and the Shadow Side of Wealth. Interventions from thinkers perfect this philosophical and intellectual object of a film. And the resolution, clear, obvious like the result of a complex mathematical equation. An essential equation:  debt is a mental construct, not a base to build our politics, economics and lives upon.

The documentary prize : “Trashed” by Candida Brady, a film we’ve posted about before.

In everyday life we rarely talk trash. What’s the use of trash anyway ? We just throw it away. But where is away ? That’s what actor Jeremy Irons sets out to discover. Away is a landfill extending closer and closer to housing estates in rural England. Away is an incinerator in Iceland that produced so much dioxine that humans, animals, land and water have been contaminated. Away is the ocean. As for the use of trash, we discover it in a hospital in Vietnam that treats children with birth defects induced by a dioxine, the agent orange : trash makes a long-lasting poison.

Between Bill Pullman, Margaret Atwood and Jeremy Irons, high-profile personalities really were under the lights at this edition of the Paris Environmental Film Festival. But I tend to root for the underdog. My favorite films this year were directed by young film-makers and produced with smallish budgets. Call me biased: both were French. The first one, Heritage Fight by Eugenie Dumont was filmed in Australia so language won’t be an issue.

If Heritage Fight had just been a journey to the land of the Goolaraboloo, ancient inhabitants of the Kimberley in Western Australia, it would have already made for a brilliant documentary. For the Goolaraboloo, country is culture, culture is country. The dinosaur footprints spread along the coast are part of their cosmogony. They’ve taken care of this land of breathtaking beauty forever and love to share their knowledge with whoever. So it seems rather odd that the government of Western Australia and Woodside, an oil and gas company, chose the Kimberley to host the second largest gas plant in the world.

The following film Mouton 2.0 (yeah you got it right it means Sheep 2.0) by Antoine Costa and Florian Pourchi, is in french. Its trailer has not been subtitled yet, but its visual mastery makes up for it.

Sheep farmers protest against the peculiar decision by the European Union to impose the microchipping of their animals. Through this fight, the traditional herders refuse the industrialization of their agriculture, livestock and lifestyle.