Also known as candlefish, eulachon (Thaleichthys pacificus) are so oily that they can ignite when dried. Traditionally, eulachon were used at times as lights by Nisga’a people. PHOTO: PAUL COLANGELO 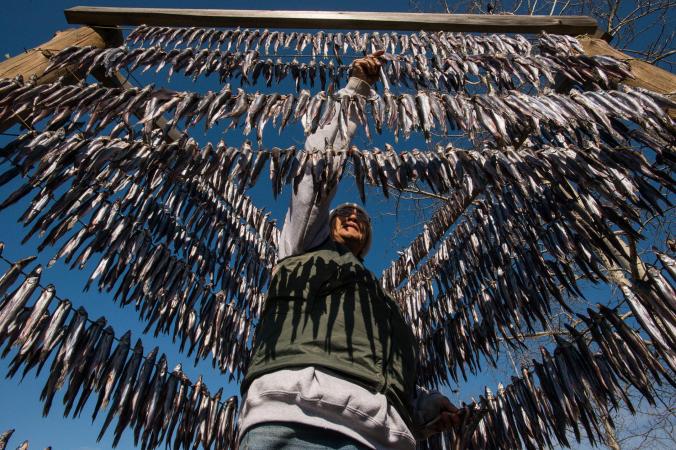 Often referred to as “salvation fish” for safeguarding native people from starvation, the eulachon is now in need of a lifeline itself—as its habitat and population are in danger. National Geographic reports on the fish’s historical and cultural significance and the the many changes in the ocean that have led to the decline of the eulachon’s numbers:

The fish are also known as halimotkw, often translated as “savior fish” or “salvation fish.” Eulachon return to the rivers here to spawn at the end of the North Pacific winter, when historically food supplies would be running low. In lean years the eulachon’s arrival meant the difference between life and death for people up and down the coast.

Today, the fish that used to safeguard native people from starvation is itself in need of a lifeline.

Eulachon was once such a valuable commodity that trade routes in coastal British Columbia and southeast Alaska came to be known as “grease trails.” The eulachon’s buttery flesh is so rich in oil that a dried fish will light and burn like a candle. Aboriginal cultures developed a process to extract that fish oil to create a vitamin-rich grease that resembles vegetable shortening—though with a malty, fishy flavor that is, famously, an acquired taste—and that could be transported or stored without spoiling.

It was a grease trail that led Alexander Mackenzie down to the sea near Bella Coola in 1793, when he became the first European to reach the Pacific Ocean by land along a northern route, more than a decade ahead of Lewis and Clark. Many of the pathways went on to become pioneer roads and modern highways.

But in the 1990s, the silver runs of eulachon began to collapse. Theories to explain the decline ranged from overfishing to climate change to the industrialization of river corridors. Since eulachon had never been an important species to commercial fisheries, little research was done to determine the cause. Now, more than two decades later, many eulachon runs live on only in memory.

New threats to the species, such as coastal pipelines and port expansions, continue to arise, but there are also signs that a fragile recovery could be under way. If so, the eulachon’s saviors will be the same indigenous tribes that the fish once sustained.

Eulachon are unique among at risk federally listed species in that there may be more eulachon at any given time than the total number of individuals from all other U.S. endangered species combined.

But eulachon are “forage fish,” meaning they play a bedrock ecological role as food for almost every predatory creature in the sea. Along Pacific Northwest rivers, people know the eulachon are coming when whales, seals, sea lions, eagles, and tremendous flocks of gulls show up to meet them. Sheer abundance is the eulachons’ survival strategy, and no one knows how large the population needs to be to remain viable.

Read more on how oil sourced from the fish is important in food and medicine.

One thought on “In the Name of the ‘Salvation’ Fish”