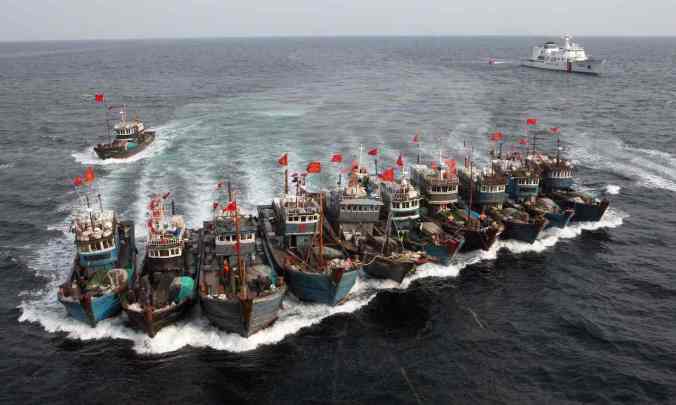 Chinese boats banded together with ropes, after alleged illegal fishing in South Korean waters in the Yellow Sea off the southwestern coast county of Buan. Photograph: Dong-A Ilbo/AFP/Getty Images

Tragedy of the commons on the high seas, fought by those who perceive their interests in common enough to do something about it (a tricky thing, as we note frequently), once again in the news.  Thanks to the Guardian, and environmental reporter Emma Bryce, for this reportage:

The first of its kind, a new international treaty obliges signatories to intercept pirate fishers before they can sell their catch

In March, the Argentinian coast guard shot at and sank a Chinese vessel that was alleged to be fishing illegally in Argentinian waters (the crew were all rescued). While it’s unclear whether the boat was committing crime, the incident showed that the tension surrounding pirate fishing is reaching a peak, marked elsewhere by increasing conflict, and the detainment and scuttling of illegal fishing fleets. But for pirate fishers, the financial gains appear to be worth these risks.

Illegal fishing vessels siphon off up to 26 million tons of illegally caught fish each year, which amounts to over $23bn (£16bn) in profit. This not only deprives legitimate fishers of their catch, but as it’s an unregulated practice, it also undermines the stability of fisheries stocks around the world. Illegal fishing also has a hand in driving already threatened species closer to extinction—like the critically-endangered vaquita, the world’s smallest porpoise, whose fate is rapidly being worsened by illegal fishers in Mexico who tangle and drown the small, protected mammals in their gill nets.

The only common ground illegal fishing vessels share with ordinary fishing boats is their dependence on ports, where they dock with their catch so they can bring it to market. If they can’t take refuge in one port, they may try their luck at the next one, assuming they’ll always have some place else to go with their illicit fish.

But a momentous new treaty, led by the Food and Agricultural Organisation (FAO), aims to shut down this convenient network. Known as the Port State Measures Agreement (PSMA), the treaty, which comes into full force on 5 June, requires signatory countries to inspect or stop suspicious fishing vessels from entering their ports. Under the banner of the rule, countries that have signed now hold a legal obligation to, quite literally, leave illegal fishers out in the cold.

Over the past several years, the effort to get the treaty ratified has been quietly ticking away in the background, as countries have been slowly adding their names to the list of signatories. Recently, a spate of newcomers—Gambia, Sudan, Thailand, and Tonga among them—pushed the number above the 25 required to bring the treaty into force. And last week it reached 30 signatories, a total that includes the United States, and the European Union, which counts as one entity.

The PSMA completely changes the focus of enforcement. Whereas in the past, the battle against pirate fishing has been fought predominantly on the waves, requiring huge resources, manpower, and time to track mostly elusive pirate fishers, this new rule turns ports into the first line of defence. “You’re really just waiting for the vessels to come to you,” says Lori Curtis, who is part of the FAO fisheries team working on the new agreement. “It is novel in that it targets the ports. And it targets illegal fishers by focusing on the element that they have to use to bring their catch to market,” adds Tony Long, director of the Ending Illegal Fishing project for the Pew Charitable Trusts. “It really does pull the net quite tight around the activity.”

The treaty is unprecedented, Long adds, because it’s the only international agreement so far that tackles illegal, unreported, and unregulated fishing. On the ground, it will work by imposing several measures. Firstly, incoming vessels will have to request permission to enter a port before docking, and be willing to provide information like the vessel number, and if it’s a fishing boat, the catch on board, and whether they plan to land it.