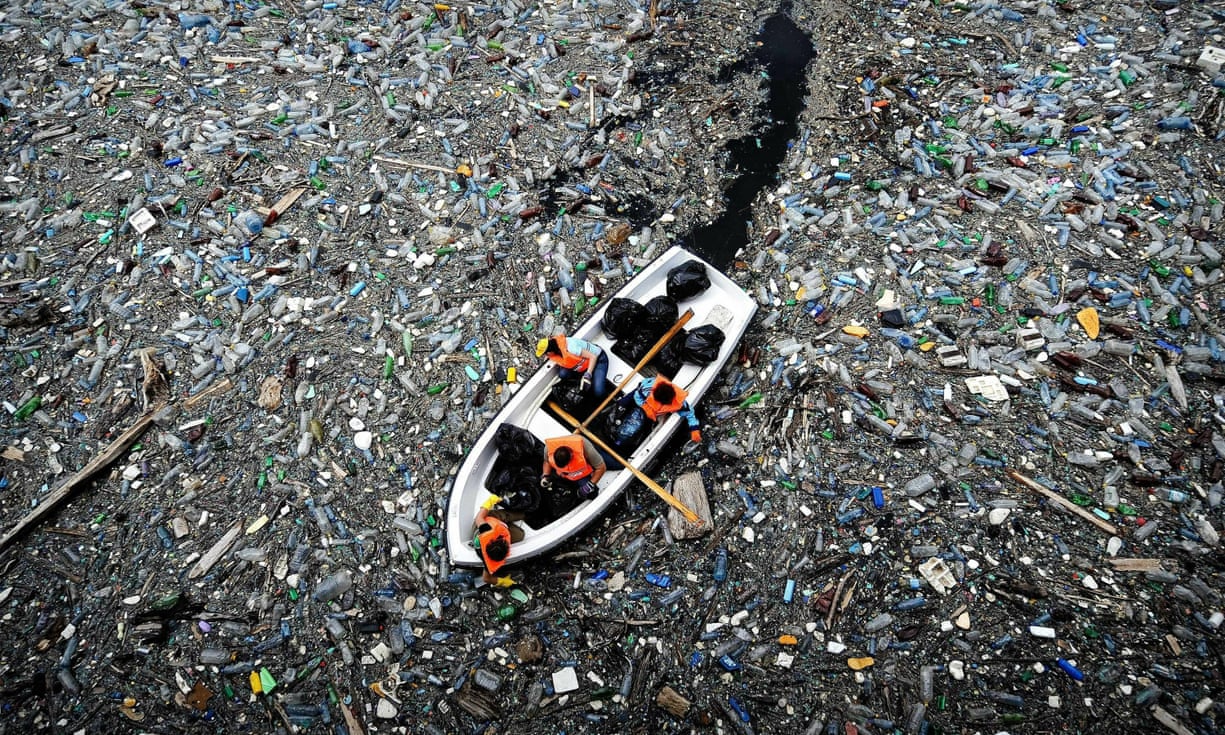 One candidate to be considered as evidence of the Anthropocene is plastic pollution. Photograph: Dimitar Dilkoff/AFP/Getty Images

We’ve covered the science and evidence behind the idea of our new geological epoch – one influenced by human activity – several times over the years, quoting various sources like The New Yorker, the New York Times, and The Economist.  Now, the Working Group on the Anthropocene has presented their official recommendation to the International Geological Congress that the Anthropocene be declared a new epoch starting around 1950, based on world-wide evidence such as radioactive elements from nuclear bomb explosions, plastic pollution, and even domesticated chicken bones. Damian Carrington reports:

The current epoch, the Holocene, is the 12,000 years of stable climate since the last ice age during which all human civilisation developed. But the striking acceleration since the mid-20th century of carbon dioxide emissions and sea level rise, the global mass extinction of species, and the transformation of land by deforestation and development mark the end of that slice of geological time, the experts argue. The Earth is so profoundly changed that the Holocene must give way to the Anthropocene.

“The significance of the Anthropocene is that it sets a different trajectory for the Earth system, of which we of course are part,” said Prof Jan Zalasiewicz, a geologist at the University of Leicester and chair of the Working Group on the Anthropocene (WGA), which started work in 2009.

“If our recommendation is accepted, the Anthropocene will have started just a little before I was born,” he said. “We have lived most of our lives in something called the Anthropocene and are just realising the scale and permanence of the change.”

Prof Colin Waters, principal geologist at the British Geological Survey and WGA secretary, said: “Being able to pinpoint an interval of time is saying something about how we have had an incredible impact on the environment of our planet. The concept of the Anthropocene manages to pull all these ideas of environmental change together.”

Prof Chris Rapley, a climate scientist at University College London and former director of the Science Museum in London said: “The Anthropocene marks a new period in which our collective activities dominate the planetary machinery.

“Since the planet is our life support system – we are essentially the crew of a largish spaceship – interference with its functioning at this level and on this scale is highly significant. If you or I were crew on a smaller spacecraft, it would be unthinkable to interfere with the systems that provide us with air, water, fodder and climate control. But the shift into the Anthropocene tells us that we are playing with fire, a potentially reckless mode of behaviour which we are likely to come to regret unless we get a grip on the situation.” Rapley is not part of the WGA.

Martin Rees, the astronomer royal and former president of the Royal Society, said that the dawn of the Anthropocene was a significant moment. “The darkest prognosis for the next millennium is that bio, cyber or environmental catastrophes could foreclose humanity’s immense potential, leaving a depleted biosphere,” he said.

Read the rest of the article at The Guardian; you can also find a more recent piece by Carrington that reviews the spread of domesticated chickens around the world.