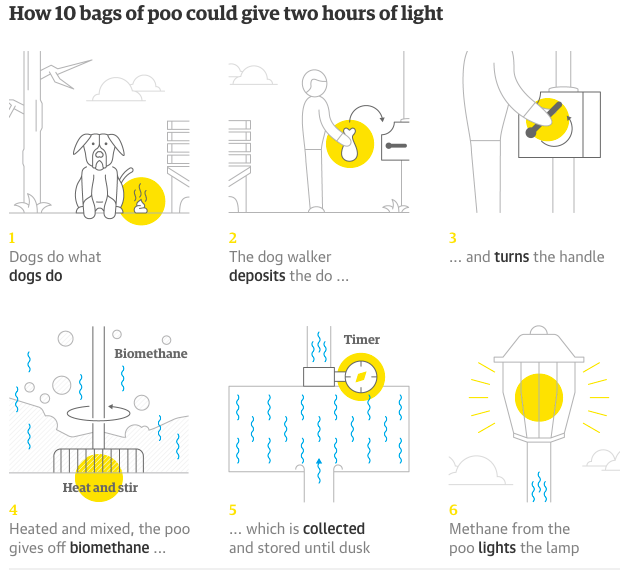 Biomethane is an age-old concept in much of what is frequently called the “developing world”, so it’s difficult to overstate the irony of “1st world” adoption. That said, it’s heartening to read of more projects aimed at maximizing poo’s full potential.

From stools to fuels: the street lamp that runs on dog do

A long winding road climbs into a gathering dusk, coming to an abrupt dead end in front of a house. Here, a solitary flickering flame casts out a warm glow, illuminating the nearby ridge line of the Malvern Hills.

Below the light sits a mysterious green contraption resembling a cross between a giant washing machine and a weather station. This is the UK’s first dog poo-powered street lamp, and it is generating light in more ways than one.

The idea seems simple enough: dog walkers deposit the product of a hearty walk into a hatch and turn a handle. The contents are then broken down by microorganisms in the anaerobic digester, producing methane to fuel the light, and fertiliser…

…Humans have used animal dung as fuel since the neolithic period, and have known how to get flammable gas from decaying organic matter since the 17th century. Small-scale anaerobic digesters are commonplace in many developing countries, while larger plants producing heat and electricity from animal manure and human sewage have long been used in the west.

Yet the energy in most excrement still goes to waste. Greater exploitation of this most plentiful resource has been held back by the availability of artificially cheap fossil fuel. But now Harper is at the vanguard of a new movement of innovators finding ingenious, sustainable ways of harnessing the power of excrement.

Local politicians in Waterloo in Ontario, Canada, are thinking along similar lines to tackle a different problem. Dog walkers who use three parks in the city are being asked to drop their pet’s poo into concrete storage units. These are periodically emptied by trucks that take it to a large central plant where it is broken down along with other forms of organic waste to produce methane and then electricity. The fertiliser byproduct is sold to farmers.

Analysis of the first five months of an 18-month trial suggests that at the current rate, the scheme would generate enough electricity to power 13 homes and remove 630kg of CO2 from the atmosphere. Modest returns perhaps – but not the main goals of the project.

“Collecting dog waste separately prevents it contaminating our recycling streams, allowing us to divert both away from our landfill sites,” says Jeff Silcox-Childs, Waterloo’s director of environment and parks.

In India, the use of small household biodigesters to get gas for fuel from cow manure is common. One social enterprise is deploying the technology on a larger scale as part of a major initiative to end open defecation in the country by 2019.