“Cabinet of Curiosities” by Frans Francken the Younger, circa 1620-25. Credit Mustafah Abdulaziz for The New York Times

Exhibition view of “Spitzmaus Mummy in a Coffin and other Treasures.” © KHM-Museumsverband.

Yesterday’s post about pre-history sleuthing coincided with my reading about this new exhibition. In our home we have a cabinet of curiosities. I also tend to like Wes Anderson films. So I had to learn more.

What is a spitzmaus, how might one have gotten mummified, and who put it in a coffin? More to the point, when and where might I see such a thing? Will it be worth the journey?

The review of this exhibition has more of a fashion review feel to it, especially with the headline photo (below, at the start of the review) and mention of celebrities in the early paragraphs. It almost made me bypass the story. But credit to Cody Delistraty for letting Mustafah Abdulaziz’s excellent photos from the exhibition speak prominently throughout the rest of his review. There are a couple of one minute videos that make clear the answers to the latter two questions:

The one above has a fleeting sense of Wes Anderson to it, whereas the one below is straightforward curator-speak:

But still, what is a spitzmaus?

Wes Anderson with his partner, the author and designer Juman Malouf, at the opening of the exhibition they curated. Credit Mustafah Abdulaziz for The New York Times

Wes Anderson, Curator? The Filmmaker Gives It a Try

Mr. Anderson and his partner, Juman Malouf, were given free rein in Austria’s largest museum. But you can’t make an exhibition as you would a movie, our critic writes. 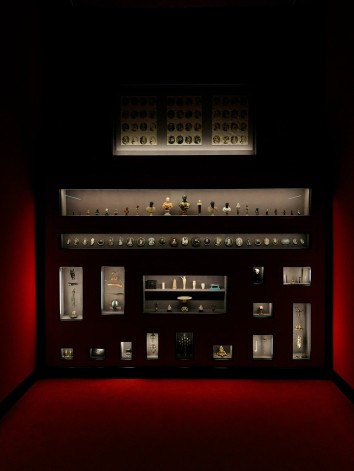 The exhibition “Spitzmaus Mummy in a Coffin and Other Treasures” was put together from objects in the collection of the Kunsthistorisches Museum, Austria’s largest. Credit Mustafah Abdulaziz for The New York Times

VIENNA — Wes Anderson looked tired. The filmmaker was wearing a red blazer and a striped tie, standing beneath the elaborate 19th-century cupola of the Kunsthistorisches Museum. His partner, the author and designer Juman Malouf, was by his side.

Dozens of friends — the actors Tilda Swinton and Jason Schwartzman; the filmmaker Jake Paltrow; and a pair of lesser-known Coppolas among them — stood around him. Photographers jostled for angles.

It wasn’t a movie premiere, but the exhibition opening for “Spitzmaus Mummy in a Coffin and Other Treasures,” which Mr. Anderson and Ms. Malouf curated, certainly had the air of one.

Mr. Anderson and Ms. Malouf were asked to put the show together from objects in the collection of the Kunsthistorisches Museum, Austria’s largest. When Mr. Anderson stepped up to the microphone on Monday to address the guests, it was with the weariness of someone who had gone to battle and come back changed.

His speech was short. “It was probably worth it,” he said, only somewhat jokingly, of the effort it took to curate the exhibition.

In his own speech, Jasper Sharp, the museum’s curator of modern and contemporary art, said putting the show together felt at times “like we were in some kind of insane Japanese game show.”

From the start, Mr. Anderson and Ms. Malouf had grand aspirations: Mr. Anderson wrote in the exhibition catalog that he hoped the show might unlock some new way of seeing not just the museum’s collection, but also “the study of art and antiquity.”

After digging through 4.5 million works — most of which are stored in a warehouse near Vienna’s airport — Mr. Anderson and Ms. Malouf, who speak little German, created a purely visual show. For the most part, they were interested neither in the provenance or rarity of a piece, nor whether it was the best example of its school or style. Rather, they grouped about 450 objects by color, material and size, in a way that reflected many of Mr. Anderson’s cinematic tricks.