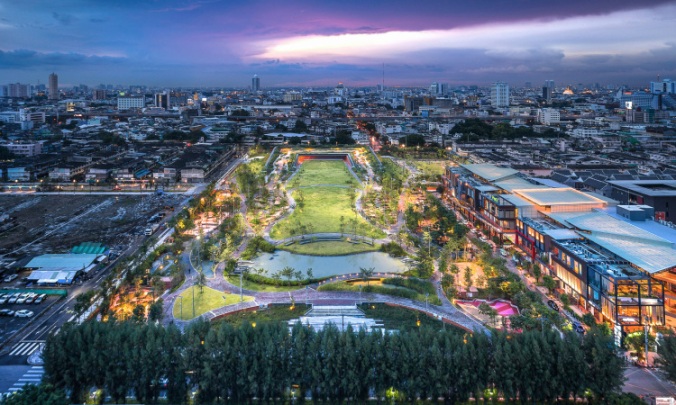 This oasis of green in the hyper-developed city has an important job: it can contain one million gallons of water. Here’s how.

Thursday night in Costa Rica Amie and I attended an event at the oldest, yet freshest Marriott in this country. Fresh with actions around sustainability. Fresh with a renovation and landscape plan that enhances the property’s coffee hacienda origins. And fresh with ideas from other parts of the world in their ongoing series of TED events. The picture above was on the screen as the speaker explained one of her projects; she gave an extended version of the TED talk she first presented earlier this year. I found some additional information about it to share here:

When Bangkok floods (and it floods a lot), this park does something amazing 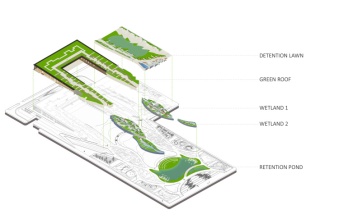 Rainwater flows from the green roof through wetlands that frame two sides of the park into the retention pond; water can also collect in the detention lawn.

Bangkok is sinking. Spilling out across the delta of the Chao Phraya River, the Thai capital was once known as the Venice of the East for its network of canals.Today, thanks to explosive development, many of those waterways have been filled with cement. With nowhere for water to go, Bangkok has become notorious for frequent, destructive floods, sometimes after as little as 30 minutes of rain. The reality is that this city of 20 million people, built on shifting river mud, is sinking at the rate of more than one centimeter a year and could be below sea level as soon as 2030. 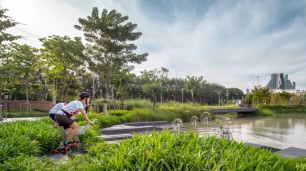 Stationary bikes serve two purposes: to give people a workout and to keep the pond water from getting stagnant.

Thai landscape architect Kotchakorn Voraakhom, a TED Fellow, watched firsthand as her city became a dense concrete jungle. “When I was young, there were rice fields and canals in the city,” she remembers. “I could hear boats from my house in central Bangkok. Now, all those fields and canals have been stopped with concrete and covered by highrises. All of the buildings and concrete become obstacles for water to drain, so the city floods.”

At her Bangkok firm Landprocess, Voraakhom designs parks, gardens, green roofs and bridges that address the city’s flooding problem while also reconnecting residents to their natural environment. “We’re so much in the buildings,” she says. “I think it’s very necessary for us, as urbanists, to have places where we can reconnect to our nature, to Mother Earth. Just to see the sky.”