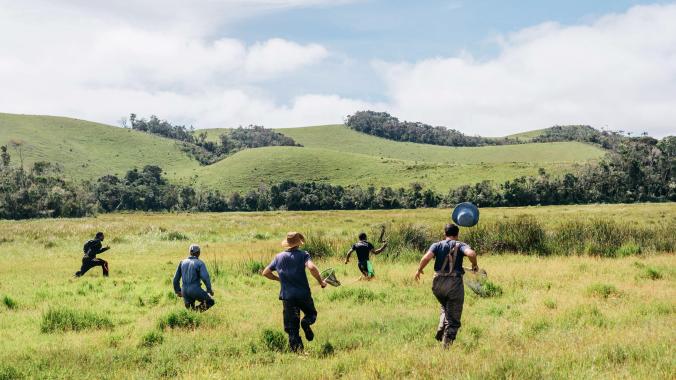 Expedition members sprint to flush Slender-billed Flufftails, among the world’s most elusive birds, in a marsh in Bemanevika reserve. Photo: Tristan Spinski

Bioprospecting, a topic we have not posted enough about, came to our attention in the mid-1990s through Costa Rica’s National Institute of Biodiversity. Kimon de Greef, writing for Audubon Magazine, offers an inside view of a prospecting expedition in one of the most wondrous, and at-risk natural habitats on the planet:

The rediscovery of a long-lost duck spurred the creation of two protected areas in the country. Now researchers are scouring these spots for other endemic species before it’s too late.

With only a few kilometers to go during day-long to Bemanevika, challenging road conditions forced the group to disembark from the two Toyota Land Cruisers and push them through the deep mud. Much of the terrain required the forest technicians to utilize the wench, which they fastened to tree stumps to wind the vehicles up the muddy mountain roads. Photo: Tristan Spinski

We had come this far and now we were stuck, dug in on a dirt track high above the plains. It was monsoon season in Madagascar, and thunderstorms had laid waste to the deeply rutted road. Already we had traversed seemingly unnavigable passes on our way to the remote northern mountains, mud churned to slurry by each passing set of wheels. Almost 24 hours later, this slope flanked by agave plants had defeated us. Our drivers took up shovels: There were ruts to flatten, boulders to excavate and heave into the bushes. As the workers toiled, cicadas hissed from the treetops. 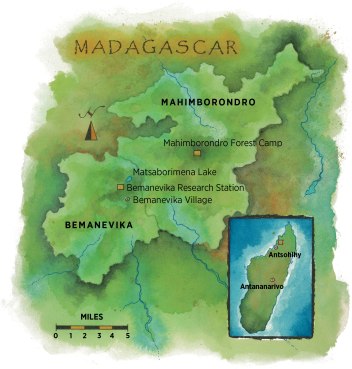 For the field biologists I was accompanying, this breakdown of rural infrastructure held great promise. They were on their way to survey some of the island’s last remaining virgin rainforests—shrinking havens of exceptional biodiversity, including some of Earth’s rarest birdlife. “There’s definitely a correlation with how hard it is to get in,” said John Mittermeier, an expedition leader, ornithologist, and geography Ph.D. student at Oxford University, “and how likely you are to find new stuff.” 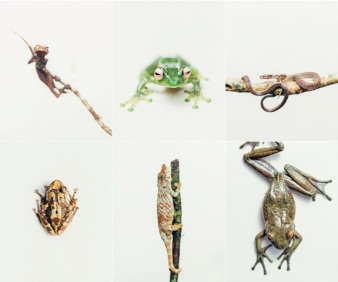 Now a cry went up among the team. A snake was moving its way through the undergrowth, and with abandon they leapt after it. Luke Kemp, the herpetologist on the expedition, crouched beside the bushes, poking around but coming up empty. “It’s like an addiction,” he told me. “I can’t stop.”

The biologists had congregated from four countries, united by a relentless, even maniacal fascination with wildlife. They wore faded shirts from scientific conferences and were never without their binoculars. Instead of making small talk, they discussed bird calls and sampling methods, animated by purpose and shared expertise. In unison, like meerkats, Mittermeier and the other two birders swung their binoculars from side to side, trying to glimpse what sounded to them like an endemic robin. The two entomologists swept the air with butterfly nets; they would not hesitate, when their hands were full, to pop wriggling insect specimens between their lips.

Lily Arison Réné de Roland stood at the roadside, watching his younger colleagues with amusement. The renowned Malagasy ornithologist has the demeanor of a monk—easygoing and completely bald, often resting his hands on his ample belly. For half his life he has worked for the Madagascar branch of the Peregrine Fund, a U.S.-based conservation nonprofit, becoming national director in 2004. In 2006 he stunned the birding world by locating a flock of Madagascar Pochards, an endemic diving duck thought to have gone extinct in the early 1990s.

Through this rediscovery, Réné de Roland had secured government protection for two forest tracts where he found the pochards, comprising some 435 square miles of threatened habitat. Since then, one reserve, Bemanevika, has been extensively surveyed, revealing breeding populations of serpent eagles and red owls, as well as the bizarre-nosed chameleon, a reptile species new to science with a corneous, knobbled beak. But the larger, more isolated reserve, Mahimborondro, has never been thoroughly explored.

Hope is like oxygen for conservationists, and it seemed likely that these remote areas harbored further biodiversity riches. Over the next two weeks we would trek into the forest’s depths, drenched by rain and assailed by leeches, to collect as much information as possible about the animals that lived there. The scientists might discover new species; many of them had made such finds on previous expeditions. But this was not the main purpose of their work. With better scientific data, people like Réné de Roland would be able to better manage the reserves and argue for their continued protection, amid demands to open up more lands for agriculture.

Our drivers reshaped the road enough to make it passable, and at last we arrived at the research station in the Bemanevika reserve, a clutch of wooden shelters and weather-beaten tarps built by the Peregrine Fund in 2009. It had taken us eight hours to drive 30 miles, a speed only marginally faster than walking; from here our journey would continue entirely on foot. We piled out of the vehicles into a lush forest clearing. A cacophony of frogs and birds rose to greet us. “Rainy season makes it difficult to get here,” said Réné de Roland, a knowing smile on his lips, “but it’s worth it.”…