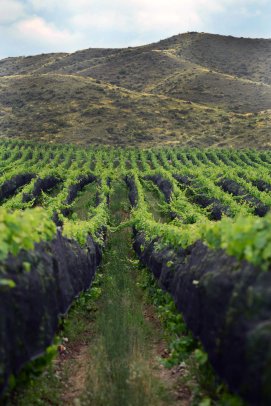 Wine, which is among the most sensitive and nuanced of agricultural products, demonstrates how climate change is transforming traditions and practices that may be centuries old.

Around the wine-growing world, smart producers have contemplated and experimented with adaptations, not only to hotter summers, but also to warmer winters, droughts and the sort of unexpected, sometimes violent events that stem from climate change: freak hailstorms, spring frosts, flooding and forest fires, just to name a few.

Farmers have been on the front line, and grape growers especially have been noting profound changes in weather patterns since the 1990s. In the short term, some of these changes have actually benefited certain regions.

Places, like England, that were historically unsuited for producing fine wine have been given the opportunity to join the global wine world, transforming local economies in the process.

In areas like Burgundy, Barolo, Champagne and the Mosel and Rhine Valleys of Germany, where great vintages were once rare, warmer growing seasons have made it far easier to produce consistently exceptional wines. This run of prosperity has sent land values (and wine prices) soaring, and it has turned farmers and winemakers into global superstars.

Even with such success, the character of these wines has evolved in part because of the changing climate — in some cases subtly, in others deeply.

And more disruptions are coming, much faster than anybody expected. The accelerating effects of climate change are forcing the wine industry, especially those who see wine as an agricultural product rather than an industrial beverage, to take decisive steps to counter or adapt to the shifts.

So far, these efforts are focused on five factors that are inherently crucial to growing and producing wine.

1. The Wine Map Is Expanding

Winemakers are growing grapes in places once considered too cold for fine wines.

Historically, many great wines have been made along the ragged edge of the possible. Grapevines seem to thrive where they are most challenged, whether in poor soils that force roots to plunge deeply to find moisture or in marginal climates where they must struggle to ripen.

For some of the world’s best-known grapes, including pinot noir, chardonnay, nebbiolo and riesling, these borderline environments permit a combination of low yields and phenolic ripeness, in which sugar, acid and tannins are in balance for producing thrilling wine.

Conversely, if these grapes are planted in overly fertile soils in warm climates, the wines they make will seem dull and flabby, with little of the character and nuance that has made them so prized.

As the climate has warmed, regions that were once considered too cold are now demonstrating that they, too, can produce fine wine, as long as the other elements are in order. In pursuit of the best sites, wine producers are moving north in the Northern Hemisphere, and south in the Southern.

England is a perfect example. Thirty years ago, nobody had ever heard of English sparkling wine. But as the climate has warmed, a world-class sparkling wine industry has developed, with new vineyards being planted at a dizzying pace, primarily along the southern coast.

From Kent in the east through East and West Sussex, Hampshire, Dorset and as far west as Cornwall, fine sparkling wines are being made, produced by the same method as Champagne, but with their own character.

Many of the best vineyards are planted in chalky white soils that are geologically identical to the most prized soils of the Champagne region of France. Those soils have been in England for eons. But until recently, the climate was too cold. Now, Champagne companies like Taittinger and Vranken-Pommery Monopole have invested in English vineyards, hedging their bets as the once-marginal climate in Champagne has warmed.

It’s not only England. Vineyards have been planted in Belgium, Denmark, Norway and Sweden, some with hybrid grape varieties bred specifically for colder weather, but others, like a riesling vineyard in Norway, with vinifera grapes, the species that accounts for all the classic European varieties. Grapes for fine wines are now being grown in northern Germany, and in the Canadian provinces of Ontario and British Columbia.

In the Southern Hemisphere, growers are pushing south, deep into Patagonia in Argentina and Chile. Some of the plantings are now experimental, but in coming years, expect to see these areas more deeply explored…