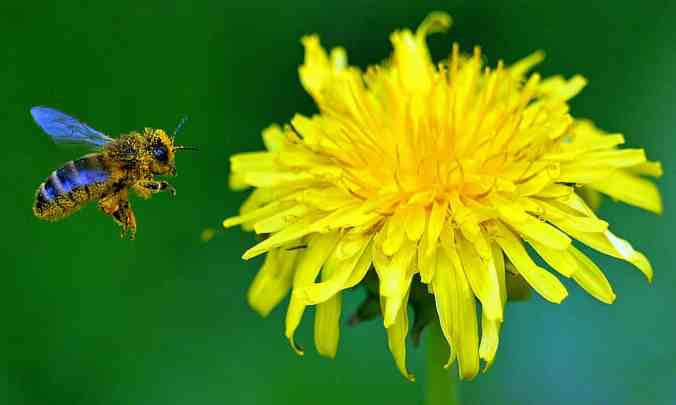 Each dandelion head has up to 100 individual flowers. Photograph: Janek Skarzynski/AFP/Getty Images

So many challenges, so many unanswered questions about why bee colonies are collapsing. In the realm of how to help, the UK has a new notion:

Gardeners should avoid mowing over dandelions on their lawn if they want to help bees, according to the new president of the British Ecological Society.

Dandelions – which will start flowering in the UK this month – provide a valuable food source for early pollinators coming out of hibernation, including solitary bees, honey bees and hoverflies.

Each dandelion head contains up to 100 individual flowers, known as florets, which contain nectar and pollen. There are 240 species of dandelion in the UK.

Prof Jane Memmott said: “If dandelions were rare, people would be fighting over them. Because they’re common, people pull them out and spray them off and all sorts of horrible things. Just let them flower.”

Memmott, who took over as president of the BES at the start of this year, is also a professor of ecology at the University of Bristol.

She said gardeners should avoid planting too many “pompom shaped” flowers, such as old English roses and dahlia, because they focus so much of their energy on producing petals and have very little nectar and pollen. “As a rule, if you can see the pollen and nectar parts of a flower without pulling back petals, then it’s OK for pollinators,” she said.

Carrots that have flowered, or “bolted”, and onions in unkempt vegetable gardens are also some of the best plants for pollinators…