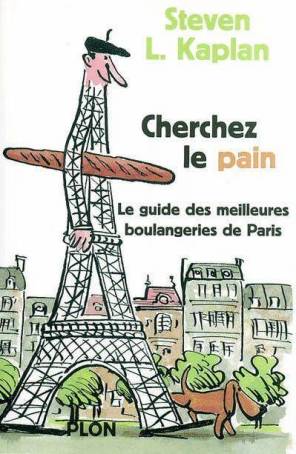 Yesterday’s post got me thinking more about bread, which reminded me of Cherchez le pain. This guide to the best bakeries in Paris was published when we lived there, and its author had been my professor at Cornell. As soon as I saw the publicity for the book I sent him an email congratulating him. To my surprise, he was on sabbatical leave, living just a few blocks from where we were living, so I invited him to join us for dinner.

I had sat through enough of his lectures on the history of food to anticipate an interesting dinner, but I was not prepared for what might sound now like a parlor trick. As soon as we sat for the meal, he picked up the bread in front of him, our favorite from a bakery we had chosen from dozens during our first few months living in that city. He held it to his nose, then brought it to his ear and tapped it with a spoon. He broke it in two and pressed his face into it. Maybe there was more to the show that I have forgotten now. What I do remember is that he named the bakery it was from.

I was impressed. And I was gratified after that when he said we had chosen well. But then he mentioned that if we were willing to walk just two blocks further we would find a bakery that ranked in the top five out of six hundred bakeries he had sampled in Paris. Next morning, of course, we went to that bakery and bought what might be the best bread of our lives. As we walked home with our bread, our entire family halted as we approached the bakery that had been our regular bakery for the past several months. We decided to walk an entire city block out of our way so that the baker would not see us having bought our bread elsewhere.