Thanks, as always, for the interesting news on creative use for mushrooms beyond the gastronomic, from the Guardian:

Mushrooms and orange peel: could biotech clean up the building industry?

A biotech startup is researching building materials that could revolutionise construction. Not only are they biodegradable – some also absorb toxins

Cocoa husks, dried orange peel, ground blue pea flowers: the ingredients read like a tasting menu. They are, in fact, waste products that are used to make Orb – a sustainable building material that is carbon neutral. It’s versatile enough to be used for furniture or as a substitute for a wood-based sheet material. END_OF_DOCUMENT_TOKEN_TO_BE_REPLACED

Recent research has explored “helping” behavior in species ranging from nonhuman primates to rats and bats. To see whether intelligent birds might help out a feathered pal, scientists did an experiment using African grey parrots like these. Henry Lok/EyeEm/Getty Images

Thanks to Nell Greenfieldboyce, science correspondent at National Public Radio (USA), for summarizing findings about how some animals help one another. We are on the lookout for more stories of how, why, when acts of kindness happen, and if we need to turn to parrots for inspiration, no problem:

Parrots can perform impressive feats of intelligence, and a new study suggests that some of these “feathered apes” may also practice acts of kindness.

African grey parrots voluntarily helped a partner get a food reward by giving the other bird a valuable metal token that could be exchanged for a walnut, according to a newly published report in the journal Current Biology. END_OF_DOCUMENT_TOKEN_TO_BE_REPLACED

It is surprising that neither E.O. Wilson nor his biophilia concept is mentioned here, but still it is an interesting finding. Our thanks to Jim Robbins for sharing:

Ecopsychology: How Immersion in Nature Benefits Your Health

A growing body of research points to the beneficial effects that exposure to the natural world has on health, reducing stress and promoting healing. Now, policymakers, employers, and healthcare providers are increasingly considering the human need for nature in how they plan and operate.

How long does it take to get a dose of nature high enough to make people say they feel healthy and have a strong sense of well-being?

Dennis Arp stands for a portrait near a colony of honeybees outside Rye, Arizona. Photograph: Caitlin O’Hara/The Guardian

Bees are not finding the near future any brighter than the recent past. Thanks, as always, to the Guardian for keeping us apprised on this topic:

‘Like sending bees to war’: the deadly truth behind your almond-milk obsession

Dennis Arp was feeling optimistic last summer, which is unusual for a beekeeper these days.

Thanks to a record wet spring, his hundreds of hives, scattered across the central Arizona desert, produced a bounty of honey. Arp would have plenty to sell in stores, but more importantly, the bumper harvest would strengthen his bees for their biggest task of the coming year.

Beehives stand stacked along a blooming almond orchard near Shafter, California. The bees pollinate many crops, including almond trees in February, and are essential to the food chain. Photograph: Ann Johansson/Corbis via Getty Images

Like most commercial beekeepers in the US, at least half of Arp’s revenue now comes from pollinating almonds. Selling honey is far less lucrative then renting out his colonies to mega-farms in California’s fertile Central Valley, home to 80% of the world’s almond supply. END_OF_DOCUMENT_TOKEN_TO_BE_REPLACED

An elephant eats jackfruits in the backyard of a house in Valparai, Tamil Nadu. COURTESY OF SREEDHAR VIJAYAKRISHNAN

Thanks to Yale e360 for this reminder of the amazing nature we witnessed from 2010-2017 while living in the Western Ghats.

The Young Writers Awards, presented by Yale Environment 360 and the Oak Spring Garden Foundation, honor the best nonfiction environmental writing by authors under the age of 35. Entries for 2020 were received from six continents, with a prize of $2,000 going to the first-place winner. Read all the winners here.

Song of the Western Ghats: A Green Island in a Crowded Land

For a young ecologist, the mountains of the Western Ghats are a respite from India’s intense urban life — a lush land of monsoon rains, elephants, king cobras, leopards, and a spectacular assortment of birds — and a place where wildlife and villagers still largely manage to coexist.

A dhole, or wild dog, in the Western Ghats. COURTESY OF GANESH RAGHUNATHAN

What is it that draws us to the quiet, to the green? To the mist-curtained mountains, where everything is crystal clear – leaves in high definition even against an overcast sky. Where leopards leave their mark in soft mud, and you smell where an otter has walked. END_OF_DOCUMENT_TOKEN_TO_BE_REPLACED

Citizens of the USA have not much right to tell Australians what or how to think about climate change, and certainly not at this precise moment. On the contrary, scenes coming from Australia might well get Americans immediately wondering:

What Will Another Decade of Climate Crisis Bring?

2019 has been called the year we woke up to climate change. Australia’s wildfires are yet more evidence that it’s time we started acting like it.

Last week, thousands of people in the Australian state of Victoria were urged to evacuate their homes. “Don’t wait,” the alert warned. Bushfires were burning across the state; so large were some of the blazes that, according to Victoria’s commissioner of emergency management, they were “punching into the atmosphere” with columns of smoke nine miles high. The smoke columns were producing their own weather, generating lightning that, in turn, was setting more fires. Some time after residents received the evacuation warning, many of those in the most seriously affected region, East Gippsland, which is a popular tourist destination, received another alert. It was now too late to leave: “You are in danger and need to act immediately to survive.” END_OF_DOCUMENT_TOKEN_TO_BE_REPLACED

Illustration by Gluekit; Photographs by Philip Cheung for The New York Time

It is not the first time we are linking out to a story on this company, but thanks to the New York Times for In a Burger World, Can Sweetgreen Scale Up?—for a more in depth look at them.

And for that matter, for a theme we care deeply about, which is that we should all be putting more thought into the food we eat, and how it is packaged.

The market is rewarding those companies paying attention to these themes:

The chain that made salads chic, modular and ecologically conscious now wants to sell you a lot of other stuff.

On a Wednesday morning last fall, several executives at Sweetgreen, the fast-casual salad chain, gathered around a conference table at their headquarters here. They were discussing a new store format, called Sweetgreen 3.0, that had recently been introduced in New York City after two years of planning. At Sweetgreen’s other 102 locations, customers brave queues that, at peak lunch, can make T.S.A. lines look tame. Up front, employees assemble Harvest Bowls, Kale Caesars and infinite customized variants from a spread of freshly prepared ingredients, in a ritual that has become a hallmark of the modern midday meal.

At 3.0, to increase efficiency, the action had been moved offstage, to a kitchen in the rear. Customers give orders to a tablet-wielding “ambassador,” if they haven’t done so ahead of time with their smartphones, retrieving their salads from alphabetized shelves. While they wait they can mull adding one of the Sweetgreen baseball caps or $37 bottles of olive oil on display to the tab.

Many of the changes being tested at 3.0 seem crucial to realizing the ambitious plans of Sweetgreen’s co-founder and chief executive, Jonathan Neman. With its prescient mobile technology strategy, the company hopes to become something bigger — much, much bigger — than a boutique urban chain serving arugula to health nuts and yoga moms. END_OF_DOCUMENT_TOKEN_TO_BE_REPLACED

We always look for the latest on how to fight climate change and in this podcast episode there is a concise and clear explanation:

It is increasingly clear that putting less carbon dioxide in the atmosphere will not be enough to combat climate change; we take a look at the effort to actively remove the stuff from the air. Our correspondent takes a ride on Chicago’s Red Line, whose length represents a shocking level of inequality. And why a push to go organic in Turkey isn’t everyone’s cup of tea.

‘The Arctic refuge is not just a piece of land with oil underneath. It’s the heart of our people; our food security, way of life and very survival depends on its protection.’ Photograph: Saul Loeb/AFP/Getty Images

Thanks to the Guardian for this op-ed by Bernadette Demientieff:

Goldman Sachs agreed to stop funding Arctic drilling. Will other banks join them?

If banks destroy our homeland, they’ll have the Gwich’in Nation, and the millions of Americans who stand with us, to answer to

Last fall, I traveled more than 4,000 miles from my home in Alaska to meet with major banks and urge them to help protect the Arctic national wildlife refuge from destructive oil drilling and exploration. In all the years I’ve worked to defend this place, we’ve been focused on trying to make our voices heard by leaders in the White House or in Congress, and I never thought I’d be sitting in a conference room on the 43rd floor of Goldman Sachs’ global headquarters in downtown New York, talking about the Arctic refuge. END_OF_DOCUMENT_TOKEN_TO_BE_REPLACED 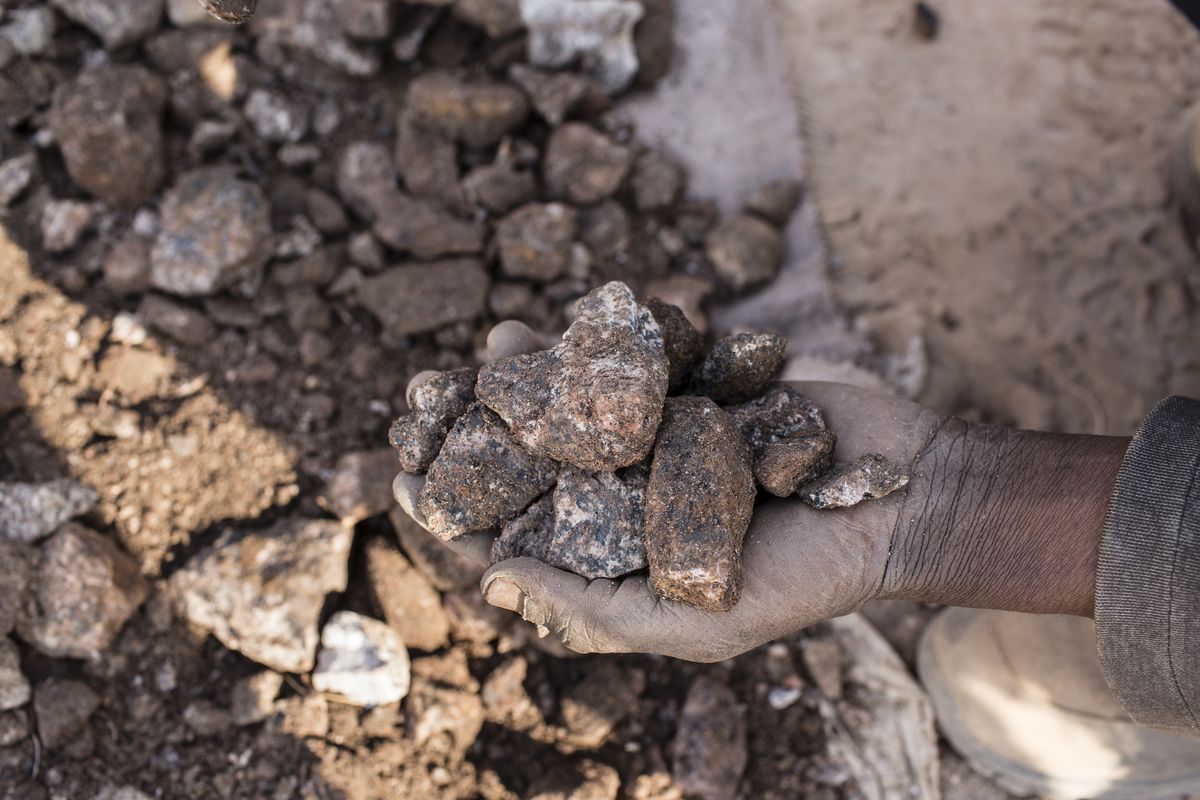 Thanks to Justine Calma for this start of the year, it’s not easy being green, observation on how cleaning up can be as messy as the mess-making that proceeded it:

The solar power and electric vehicles we need to stop the climate crisis pose a different threat to people and the environment: a boom in mining. Moving away from fossil fuels depends on tech like batteries and solar panels that can provide alternative forms of energy. But digging up the raw materials can undermine human rights and destroy fragile ecosystems. As governments and industries try to tackle climate change by building up renewable energy, they’ll need to consider other problems unearthed in the process. END_OF_DOCUMENT_TOKEN_TO_BE_REPLACED