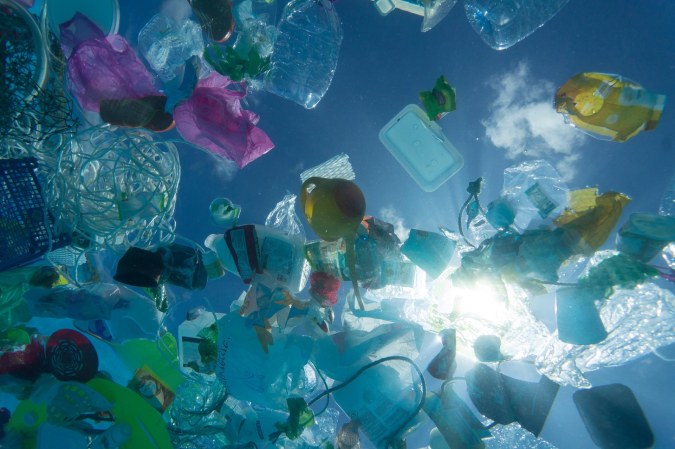 It is likely that marine debris kills hundreds of thousands of sea birds, turtles, and marine mammals each year. Photograph by Paulo Oliveira / Alamy

It is a 10-15 minute read with a two hour hangover of depression. But a must-read. Thanks to Carolyn Kormann for getting us very clear on the problem of plastic in our oceans:

Where Does All the Plastic Go?

Every year, an estimated eight million metric tons of land-based plastic enters the world’s oceans. But when marine researchers have measured how much of this plastic is floating on the water’s surface, swirling in offshore gyres—most notably, the so-called Great Pacific Garbage Patch, between Hawaii and California—they have only found quantities on the order of hundreds of thousands of tons, or roughly one per cent of all the plastic that has ever gone into the ocean. Part of the explanation for this is that all plastic eventually breaks down into microplastic, and, although this takes some polymers decades, others break down almost immediately, or enter the ocean as microplastic already (like the synthetic fibres that pill off your fleece jacket or yoga pants in the washing machine). Scientists have recently found tiny pieces of plastic falling with the rain in the high mountains, including France’s Pyrenees and the Colorado Rockies. British researchers collected amphipods (shrimp-like crustaceans) from six of the world’s deepest ocean trenches and found that eighty per cent of them had microplastic in their digestive tracts. These kinds of plastic fibres and fragments are smaller than poppy seeds and “the perfect size to enter the bottom of the food web,” as Jennifer Brandon, an oceanographer at the Scripps Institution of Oceanography, told me. “They have been shown to be eaten by mussels, by coral, by sea cucumbers, by barnacles, by lots of filter-feeding plankton.”

But what happens to all the marine macroplastic—big stuff, like buckets, toys, bottles, toothbrushes, flip-flops—before it breaks down? Since most macroplastic has not been found floating at the surface, its location has, for many years, remained a mystery to scientists. “The question that everyone in the community has is, ‘Where is all the plastic?’ ” Erik van Sebille, an oceanographer who is leading a major five-year mapping project called topios, or Tracking of Plastic in Our Seas, told me. He calls the missing ninety-nine per cent “dark plastic.” It’s the dark matter of the sea. END_OF_DOCUMENT_TOKEN_TO_BE_REPLACED

Dutch engineering student Boyan Slat announced in a 2012 TEDx talk that he had invented a way for the oceans to rid themselves of plastic with minimal human intervention. About 8 million tons of plastic enters the ocean each year. Part of this accumulates in 5 areas where currents converge: the gyres. At least 5.25 trillion pieces of plastic are currently in the oceans, a third of which is concentrated in the infamous Great Pacific Garbage Patch. Slat’s idea is to building a stationary array with floating barriers that would filter and collect floating plastic using the ocean’s natural currents.