When I started reading this short piece below, subtitled “The chefs Roy Choi and Jose Mejia sample the Vegan Hooligans’ plant-based junk food at an L.A. pop-up.” and containing no photos, before getting two paragraphs in I had to see what Abby’s Diner looked like, and found the image above and those below, on Instagram and in a story by KCET, so following is a mix of the sources:

The chef Roy Choi posted up at the counter of Abby’s Diner in Los Angeles recently. Several times a week, the place morphs from a traditional greasy spoon—booths, tiled floor, B.L.T.s—to a greasy spoon that serves vegan renditions of such drive-through classics as the McDonald’s McRib. 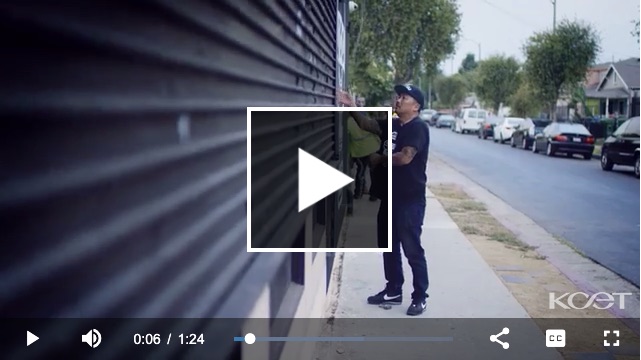 Sheila Marikar has not appeared in our pages before, but I will be on the lookout for more from her, because even without images (thanks to KCET and the Hooligans’ Instagram account for those here) her words make vegan more compelling:

Jose Mejia is the man behind the Vegan Hooligans.

“I like to re-create a lot of stuff from fast food so people feel comfortable,” Jose Mejia said. He is a founder of the Vegan Hooligans, which began popping up last February. (The name is a nod to his love of punk rock and soccer.) He wore overalls and a brown beanie. “I wanted to create a brand that didn’t just capture the eyes of, like, vegans,” he added.

Eleven years ago, Choi co-founded Kogi BBQ, a fleet of Korean-taco trucks that fuelled a food-truck renaissance and got him on a number of best-of lists (Food & Wine Best New Chef, Time 100). He is not a vegan. “Kogi, for Pete’s sake, means ‘meat’ in Korean,” he said. But after meeting Mejia while filming an episode of his TV series, “Broken Bread,” a less hedonistic version of Anthony Bourdain’s “No Reservations,” Choi decided to try more meat substitutes. Now he eats animals maybe once a week. END_OF_DOCUMENT_TOKEN_TO_BE_REPLACED